Missed your shot at BRUUUUUUCE on Broadway?

The very next best thing was Jim Boggia’s SOLD OUT show last night at Arlene’s Grocery in Manhattan’s Lower East Side: “Bruce Off Broadway” 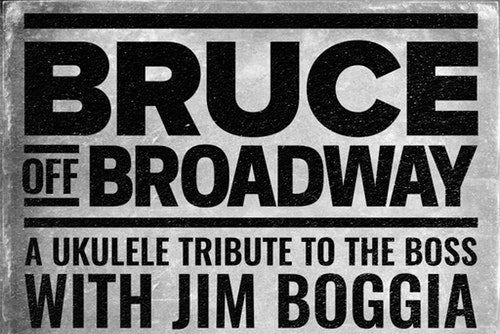 Jim’s tribute to the Boss’ was inspired by fan response to his spectacular ukulele arrangement of Thunder Road, the iconic first track off Born To Run.

Jim with his uke in hand took the stage opening with “Growing Up” from 1973’s Greetings From Asbury Park.

The following 90 minutes paid homage to Springsteen’s legacy with a unique showcase of elaborate arrangements that mastered the power, passion and applicability of each song.

Highlights included an arousing version of Fire and an emotive take on the anthemic Born In the USA, where Jim captured the loss, anger and current relevancy very effectively.

It is with great hope that Jim capitalizes on last night’s very successful outing and takes this uke show on the road. Our only suggestion: We’re gonna need three hour shows.